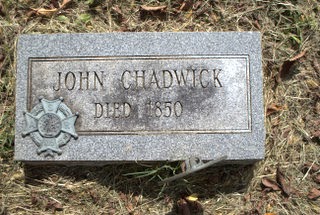 John Chadwick was born some time around 1760. He was living in North Carolina when the Revolutionary War broke out around him. His father's house was burned, and John joined the army.

John Chadwick took part in the Battle of Guilford Courthouse on March 15, 1871 a crucial battle of the Southern Campaign.[1]  Although Major General Nathaniel Green and his 4,500 militia and Continental troops were forced to withdraw by a smaller army led by Lord Cornwallis, it was at a huge cost to the English army. The battle broke the tide of the British in the Carolinas; Cornwallis withdrew to Virginia, where he surrendered at Yorktown that October.[2]

After the war John moved to Kentucky.  On 12 March 1796, in Paris, Bourbon County, he married Kerenhappuch Shortridge, the daughter of George Shortridge and Margaret Muir.[3] The couple raised a family of twelve children in Greenup County, Kentucky.[4]

After Kerenhappuch's death on 17 May 1840, John married the widow Lucinda Bartrum.[5] Both John and his widow Lucinda received a pension based on his service in the Revolutionary War. John died on 4 April 1850.[6] John was buried in a family cemetery on land along the Big Sandy River in Greenup County. The Ashland Oil Company purchased the land and numerous graves were moved from the original cemetery. The original tombstones were removed, but were not placed in the new location.