On Friday I spent the afternoon with an uncle walking a cemetery in Boyd County, Kentucky. We walked about 85 % of a large cemetery before finally finding the group of graves we were looking for. It was well worth the trek, although I advise not to wear sandals when walking through unmowed grass on the hills of Kentucky. (I know of two people bitten by copperheads recently.) But the trip to the cemetery was an impromptu one, and sandals were what I was wearing. Fortunately the weather was 25° cooler than the 105° temperature the last cemetery walk I took.

John Chadwick, a revolutionary war ancestor, and his wife were buried in a cemetery that was called, at various times, Chadwick Cemetery, Ewing Cemetery, or a combination of the two. The cemetery was located, it seems, on the land John bought from his father-in-law George Shortridge along the Sandy River. Skip forward 150 years or so and Ashland Oil bought the property and built a refinery.  In 1981, an arrangement was made between Chadwick and Ewing family members and Ashland Oil to move the graves in the cemetery to Catlettsburg Cemetery.

In the new location the graves are lined up in rows with small markers for each one. There is a large marker with Ewing engraved at the top that explains that these people were moved from the original cemetery. Pictures taken at the time they were moved showed some of the original tombstones, with names and dates; I don’t know what happened to them.

The names and dates on the stones are: 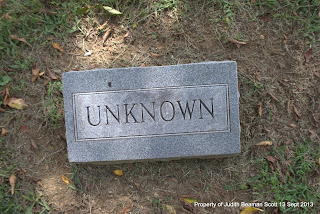 There are at least twenty-two stones marked UNKNOWN

That is a total of forty-eight graves. Whether all of these came from the old cemetery I don’t know. They are lined up in three rows, all with the same type of stone. There are also other Ewing’s buried nearby.

John’s stone has an SAR emblem, and a metal marker that says Revolutionary Soldier. On the back it says: 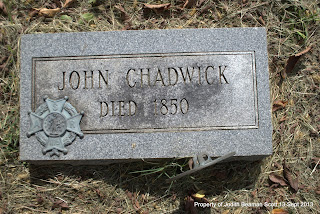 It was a lovely afternoon in Kentucky, and the results were amazing.
Posted by Judi Scott